I just finished repairing another Fender Hot Rod Deluxe. A lot of problems that people have with this amp often somehow involve the Drive circuit and a couple of resistors that are prone to overheating (R78 and R79). The issue here was that the Clean and Drive channels both worked fine, but when the More Drive switch was engaged, there was no output and the LED turned off instead of turning red.

The first thing I noticed was that the amp had been worked on before, clearly because of the two aforementioned resistors. (If you're interested, this Premier Guitar article about the overheating resistor problem will bring you up to speed better than I can.) The first sign of previous work was that all of the bolts holding the circuit board to the chassis were missing. Oopsy. The only thing holding it in place is the board-mounted pots jacks, which are bound to fail eventually because of this. The second sign was the clearly non-original solder joints on R78 and R79. There was also hot glue or silicone under the resistors (Fig. 1a), which I don't think was stock in the 90s USA Hot Rod Deluxes (but I'm not positive about that). The back of the board all around those resistors was blackened as well (Fig. 1b), which I'm sure is the reason it was serviced.

After trying to figure out what had been done already, the first thing I checked was the solder joints on the Drive/More Drive LED (Fig. 2).

I looked at the joints and poked the leads (labeled R, C, and G in Fig. 2 above). G(reen) and C(ommon) were fine, which I expected, since the Drive channel worked fine, and when that's engaged, the LED is green. When I poked the red lead, I could see the tip wiggling loosely in the bad solder joint (circled in Fig. 3). Even without wiggling it, you can see that it's a bad joint. I touched that up and the amp worked fine.

Line 6 Duoverb Head: Is Everything Glued?

I will start by admitting I was not successful at fixing this amp. I was pretty sure I wouldn't be, and I told my customer that I am not set up to diagnose or repair modeling amps or anything else that is mostly surface mounted components (which are tiny). But I said I'd take a look anyway. I always learn something, and this time was no exception, so I am sharing in case anyone else runs into the same problems I did.

I ran into a similar problem with the knobs. I didn't want to destroy any pots by pulling too hard on the knob, so I did a quick search to see if Line 6 also puts little dabs of glue on their knobs. I found a lot of forums saying that Line 6 knobs are difficult to get off, but none saying that they were glued, so I tried some pliers and a piece of plastic tubing to protect the finish (see Fig. 1 below). I put the tubing around the narrow part of the knob, gently rocked the knob back and forth a few times then pulled and they all came off with no problem. 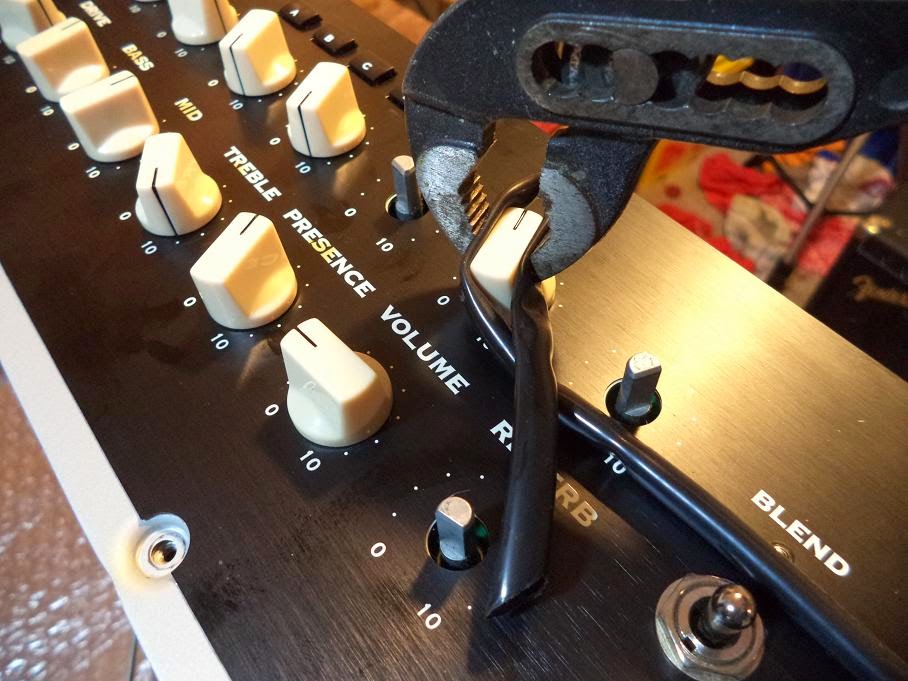 Normally, when pot knobs are hard to remove, you would put something on the faceplate to protect it, then use a couple of small screwdrivers—one each side—to pry them off. However, most of these knobs were flush with the surface of the faceplate. I could have just fit a razor blade under them, but that would have damaged the surface.

So if you have the misfortune to work on one of these amps, the chassis does come out and the knobs do come off. Just be careful in both pursuits.
Posted by smrbates at 2:56 PM No comments: