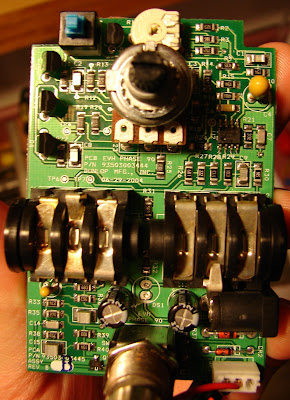 I'm posting this in the hopes that people considering the Custom Shop MXR line will be better informed:
I recently purchased an MXR Custom Shop Phase 90, thinking that I would treat myself to a reproduction of a vintage pedal. In the late 80's, I bought a mid-70's script Phase 90 for $20 and sold it a few years later for about the same. I often regretted it, so I bought the Custom Shop version, thinking it would be close enough.

The Custom Shop Phase 90 did indeed sound better than the standard Dunlop Phase 90, which has a touch of distortion and a rather harsh phase sound. I took the pedal apart to see if I could install an LED and found out that it is an EVH Phase 90 in a different enclosure. It isn't like the EVH pedal. It is the EVH pedal. It says EVH on the board (see left center of photo) and has the script switch (upper left), which is inaccessible with this enclosure. Installing an LED appears to be a simple job, but I was so disappointed by the surface mounted, decidedly un-70s vibe of this pedal that I sold it immediately and bought a '79 Phase 90 on ebay for $80, and it is chock full o' creamy goodness. I think the pedal was only $80 because (I was told) it is a transitional Phase 90 -- script guts, but with the block logo, characteristic of many MXR pedals in the late 70s. Even if it's not script electronics, it sounds gorgeous.

The Custom Shop Phase 90 does not sound bad at all, but I wanted either an old pre-Dunlop Phase 90 or a modern hand-wired version. I'm not ashamed to admit that I am among the majority of guitarists who would not be able to discern the difference between the Custom Shop/EVH Phase 90 and a 70's version (or handwired repro). But the simplicity and relative inconvenience (e.g., lack of DC adapter jack and LED) of the original have an allure that is difficult to explain.
Posted by smrbates at 7:50 PM 2 comments: