I got a non-working Ibanez MS10 Metal Charger for $40 recently. I was glad that it was an easy fix (See Fig. 1), and pleasantly surprised that the switch works (these are often spotty in the old Ibanez pedals), but I was disappointed in the pedal itself. The main issue was the level. The pedal was not as loud as the bypass signal (unity) unless I had the distortion and level cranked. Below that, the distortion sound wasn't that interesting or particularly usable. At first I thought the pedal was defective, but after a bit of poking around online, I found this post on killall -9 humans effects blog, describing the same issue. (I am a fan of mirosol through his significant contributions to Guitar FX Layouts, and was grateful that he posted this particular tidbit). 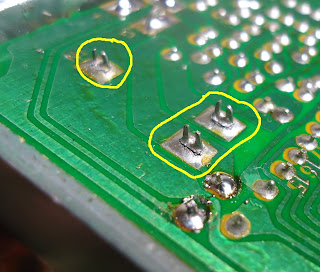 My first thought was that this pedal is a collectible, but after not being able to sell it for $50, I'm skeptical. It very well could be a collectible, but not necessarily one in high demand, at least as of this writing. At any rate, since I couldn't sell it, I figured I'd mess around with it and see if I could make it not sound bad.

Several years ago, I bought (and have thoroughly enjoyed) Brian Wampler's book, How To Modify Effect Pedals, which includes a mod for the MS10. This mod corresponded with what I had already seen in forums here and there, but included a couple of other tweaks that I hadn't seen. Brian's awesome, so I went with his suggestions.

I started by removing D5, D6, and C12 and changing R11 from a 4.7K to a 1K resistor. I zipped it up and noticed a bit of an improvement. The pedal seemed a bit louder and the distortion sounded a bit more pleasant. I then removed D3 and D4 and think I noticed more of the same. I judged only by ear, not with an oscilloscope or anything, so it's hard to tell. I can say that I plugged in and actually enjoyed playing with the pedal for a while, which was not at all like my initial experience with this pedal.


I might try replacing D1 and D2 with a different configuration (Brian suggests 4148-4148 in D1 and 4148-1n5001-4148 in D2 for "better clipping, fuller and thicker." I will probably put sockets in so I can try several different diodes without ruining the trace. But for now, at least the pedal is usable:

Posted by smrbates at 4:52 PM No comments: