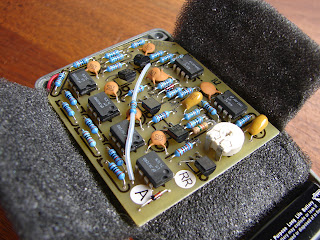 I recently purchased an MXR '74 Vintage Phase 90, but it had a couple of problems when I received it. First, the back plate bulged outward in the middle. I took it off, placed one end on a piece of wood and kneeled on it until it was straight. When I placed it back on the pedal, it was a very tight fit, but the bulge was gone. However, when I tried the pedal, it didn't work. The pedal sounded normal off, but when it was engaged, there was no phase effect. It sounded like a slightly muffled version of the clean signal. I removed the backplate, checked the battery, and looked around inside for anything obvious, but did not see anything. I tried it again before putting the cover back on, and the pedal worked fine.

Based on that, I assumed that two things that shouldn't touch were touching. The only thing I saw that could be doing that was the lug on the output jack that carries the signal. It was pointed up about 60 to 70 degrees, I would guess (about where the red line is in the photo below). I think this could have been touching a solder point on the bottom of the circuit board through the foam when the cover was on. I bent it down (gently), replaced the cover, and it has worked consistently ever since.


I read some reviews stating that the pedal  didn't work when received. So, if this is a design flaw, and others have had this problem, I thought I should make this info available. Especially because if you buy the pedal used you often don't have the luxury of returning it if it stops working.
Anyone have any similar experiences with the '74 Vintage Phase 90?
Posted by smrbates at 11:40 AM No comments: