I recently bought a non-functioning Electro-Harmonix Holy Grail Reverb. It's chock full of surface mounted components, so I wasn't sure if I could fix it, but having successfully repaired one of these before, I thought I'd give it a go.


Visual inspection revealed nothing, except a few solder joints that looked sloppier than stock. I plugged it in to verify that it didn't work, and indeed it didn't. Oddly, though, when I turned the knob, I briefly heard a reverb-soaked pop/clank sound, almost like when you jar an amp with the spring unit in it. Thinking something must be loose, I left it on and poked every wire and component that was big enough to poke with no luck.

I ran out of time, so I left it for a week or so. I plugged it in again and it worked (?!). I moved all the controls, unplugged it and plugged it in again, and it did NOT work. After poking everything again and even wiggling the board while it was on, it occurred to me that the pot might be the culprit. I sprayed the crap out of it with DeOxit, gave it a little squirt of compressed air and turned it back and forth several times.

I plugged it in and it worked. I fiddled with all the knobs and plugs like before and it still works. It must have had some gunk in the pot. It turned out to be less complicated than I expected.
Posted by smrbates at 4:33 PM No comments:

Fan Fix for Squeaks and Gigs

My daughter got pretty pokey with the buttons on our 3-speed oscillating fan, so the buttons no longer latch when you press them. I know fans are fairly inexpensive, but I wanted to fix it because I like fixing things and I hate throwing out things like fans.

Because I was pretty sure that it would be hard or impossible to find the same switch assembly, I was going to just bypass the 3-speed switches and install an on-off switch for the lowest setting, which is the only one I use with this fan. But while looking for a switch, I found a pull-chain ceiling fan replacement switch, which seemed like an easy way to keep the three speeds.


The original, non-working switch assembly had four connections: line, 1, 2, and 3. The ceiling fan had the same four connections, labeled as such on the housing. I marked the wires, snipped them, soldered the ends for stiffness (which was necessary for this switch) stripped them and inserted them into the new switch. I wrapped it in electrical tape, drilled a hole next to the non-working buttons (which I left in place to avoid having to cover four holes), and mounted it (using a washer for safe measure, since there isn't much difference between the diameter of the threads and the diameter of the brass ferrule.

It's not pretty, and it's a little less convenient than the buttons, but it was a cheap quick fix, and it works for my purposes.
Posted by smrbates at 4:16 PM No comments:

Sometimes I just can't stand the look of something, even if it's perfectly functional. I got a VHT Special 6 Ultra a couple years ago for $250 or so and I love it. But I always hated the logo. It needs a bit of color, I think, and I feel like the letters represent something, but I'm not sure what.

I searched a bit on ebay and found an old metal nameplate that happened to be the exact same size as the VHT nameplate. I'm not sure what Vulcan is (according to a very hasty internet search, a foundry?), but I like the look of it. Either way, it was a great amp for the price. 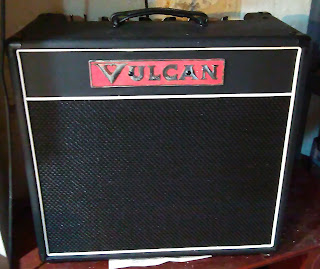 Posted by smrbates at 8:00 PM No comments: