I have often wished I didn't sell it, so I finally purchased an newer (2002) MXR Phase 90 pedal a few months ago. I could not believe how bad it sounded. The waveforms were sharp -- unlike the creamy smooth original -- and the sound was dirty. To fix this, I bought a mod kit from Vodkamods.com. While I was waiting for the kit to arrive, I found the only modifications I needed (see the link below).

I removed the circuit board, clipped two capacitors (C11 and C12) and one resistor (R28). I also adjusted the trim pot to taste (The trim pot is just above the speed pot in the photo below). To do this, I had to remove the silicon plug holding it in place, and turned the pot a very little bit as I played the guitar through the pedal. When it sounded smooth and creamy, I stopped and marked it. They say to mark it before you make your adjustments, but if it sounds awful, why would you want to remember that setting?

Here's a photo from http://www.erikhansen.net/?page_id=31 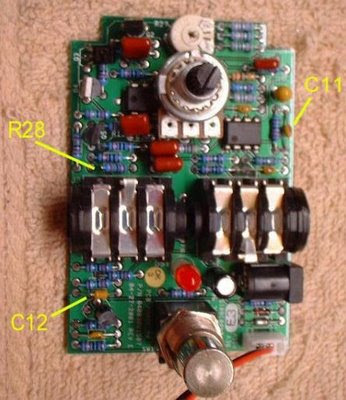 I made a mistake with this mod, though. I should have clipped one component, played, clipped another, played, etc. to see what effect each had on the sound. Instead, I just clipped them all. I lucked out, though, because it sounds great. Also, if I were to do it again, I would remove the components with a desoldering braid instead of clipping them. Especially R28, which was tricky to get at.

Regardless, It sounds great, and if you're nervous about making the mod, don't be. The improvement was tremendous. What you should be nervous about, though, is dismantling and reassembling the pedal. I have read accounts of DIYers breaking the pedal by forcing something. With such compact pedals, there is not a lot of wiggle room. If something doesn't fit when you're reassembling, do not force it.

Now, back to Vodkamods: I didn't use anything in the kit. They seem like a good company, with good customer service, etc. I just didn't need any of the mods that were in the kit. The instructions were not well written, but when I e-mailed them a question, and they responded right away, so I would buy from them again.
Posted by smrbates at 7:00 AM 6 comments: