A Drawing from Sid Couchey

Back in 2009, some facebook thing was going around where everyone was invited to share things about themselves that no one knows. One of the things I shared was that I had Richie Rich's autograph. When I was 10 or so, I had written to Harvey Comics to let them know how much I liked Richie Rich comics. The response I received was signed Richie Rich and Casper.

As it turned out, one of my facebook friends was friends with the daughter of one of the original Richie Rich artists, Sid Couchey (some of his artwork). I don't remember exactly how it all proceeded from there. My friend put us in contact, then I think Sid's daughter* asked if I would like a drawing from him (for which I am still very grateful). So I gave her my address, she talked to her dad, and a couple of weeks later I received the drawing you see below.

I was at the time 40-ish, and no longer a Richie Rich fan (although I still followed some of the artists). But Sid was at the time 90 or so, and I was glad that he was still drawing and very touched that he took the time to create this personalized drawing for an old fan. 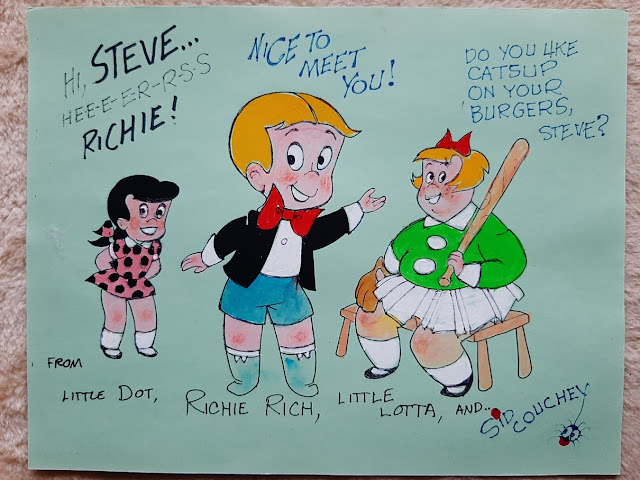 * I remember her name but am respecting her privacy
Posted by smrbates at 7:19 PM No comments: